Behind the scenes at ITN's Political Unit at Westminster

There are several striking new things about entering Parliament Square as you leave  Westminster tube station. First are the flags which give an almost festival feel to our nation's seat of power. Next is the scaffolding and staggering amount of renovation work going on to stop the Houses of Parliament actually falling down.

My host, ITV Political Correspondent Angus Walker, explains to me as we rush from corridor to cloister, restaurant to lobby, that parts of the Commons are regularly cordoned off as masonry keeps falling from towers above. There are almost too many analogies from which to draw with the current political state, that I leave it. Following a last-minute change in schedule, I was lucky enough to pin down Angus, and go behind the scenes with him on a typical lobby reporting day, both in the Commons and at the ITV studio in Westminster, to capture his thoughts for two snappy podcasts.

We lay in wait in the Central Lobby, (a place where the public can enter to meet their MP's, after going through full airline-style security), for any Brexiteer MP's who might want to comment on Donald Tusk's 'special place in hell' remarks which have just broken. Three TV news cameras are allowed in a restricted area of the lobby, but journalists mustn't stray more than a few feet from their fixed positions. Panning around the lobby, walking and filming, chasing MP's for a doorstep, are strictly forbidden. Angus is on his phone between our chats, forever dealing with the minute-by-minute changes thrust his way by the high-octane news desk back at ITN HQ. Minister for International Trade, Somerset MP and Brexiteer, Liam Fox, zooms past mouthing 'no' to Angus's plea for a quick soundbite. 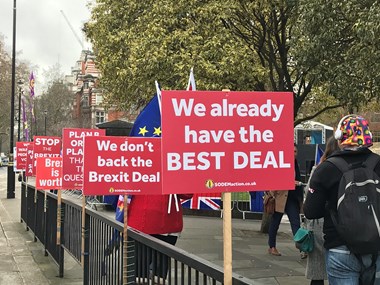 As we make another dash through the crannies and the nooks, we bump into another political correspondent, Carl Dinnen, with whom I worked many years ago in breakfast television. The two share some insight, gained from a Peer who was in the queue for the jerk chicken in the restaurant, and off we go again. Although we get to see them nightly and hear their voices on a regular basis, it’s not often you get to hear the views of a news correspondent.

Angus is a highly experienced journalist, having held the senior posts of UK Editor, Political Correspondent and Asia Correspondent for ITV News. He is also one of the skilled specialists delivering our bespoke media training at Mentor. With years of experience in the fast-paced environment of national broadcast news, he’s not short on insights into what captures attention and makes headlines. 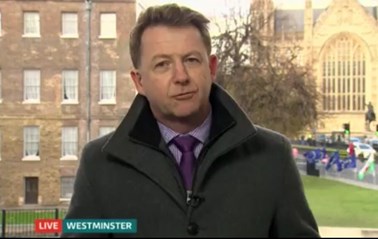 Power-walking over to ITN's Millbank studios, the third striking thing I notice about Westminster and College Green, (formally known as Abingdon Street Gardens where the media assembles), are the barriers, tented studios and media city feel, normally reserved for large royal events.

Ever since Brexit gathered pace and broadcast journalists and MP's struggled to be heard over protesters, hecklers and an increasing atmosphere of harassment, the famous green has become like a rock festival backstage area. 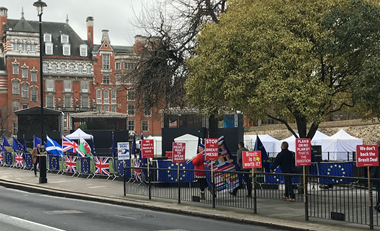 As Angus puts it; "When all the channels are here at night, all the TV lights are on and the flags out, it's like Glastonbury." Minus the excitement of a Foo Fighters performance, that is. Sky, ITN and BBC dominate with their three makeshift studios.

We discuss what drives political journalism during an issue like Brexit, the changing role of the soundbite and the power of honesty to create cut-through in the media.

Kicking-off with the current state of the Brexit debate, I ask Walker how the protracted process was impacting the interest of the public and appetite of journalists. “It’s an amazing story to be covering because it’s historic,” he assures me. “If you’re a political reporter these are fascinating times. 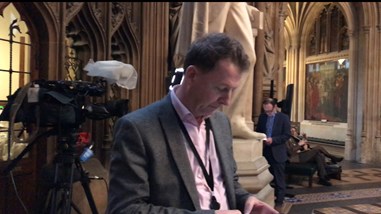 “A massive decision has been made by the British people. We’re seeing politicians wrestling with that decision. We’re seeing a huge constitutional crisis, with the Prime Minister, parliament and the people all apparently at odds with each other."

Clearly Angus thrives on the cut and thrust of the political world, despite the challenges of reporting on Brexit: “It’s the most complex story many of us have ever covered. The ‘Backstop’ for example is really difficult to explain. These are highly complex issues that need to be explained, in my case, in two minutes.”

I was interested in how easy it is to find a new angle on a long-running story, which triggers Angus to share his thoughts on why one comment regarding Brexit, was hitting the headlines again: “Look what happened today. Donald Tusk, the President of the EU Council, talking about a ‘special place in hell’ for people who promoted Brexit but didn’t have a clue how it was going to turn out.

“That’s a classic example of how phraseology and the language you use when delivering your message can create cut-through.”

He continues: “There’s a lot that can be read into those comments. That fiery rhetoric. The timing of them. They are calculated comments. For whatever reason he wanted to make those comments. He must have known he was going to cut through. And he has. He’s the top story everywhere.”

The soundbite gets a lot of attention and clients often ask if they should I be delivering soundbites the way politicians deliver them. Angus’ view? “There are too many soundbites. And too many people being very guarded. One way to cut through is to actually speak your mind.

“When people are honest, that honesty is so immediately apparent it cuts through.”

To hear the full interview have a listen here, and listen to the second episode next week to hear Angus talk about the current mood in Europe and what impact UK business voices are having on political debate at Westminster.