He regularly reviews the papers with Emma Brittan as she takes over the reins from predecessors Steve Le Fevre and Laura Rawlings. Dave worked on the show with the pair for more than a year, before Emma took over.

A seasoned radio and television journalist, Dave can regularly be heard putting his inimitable angle on the serious and light-hearted stories of the day, including where his specialism in media and crisis fits into the day's news agenda.

"It's actually great getting an extra early start to the day and keeping my hand in doing some live radio - they're a superb, friendly team at BBC Bristol. Being a guest, as opposed to a presenter, is a new experience for me because I've always been the one posing the questions and fielding the guests on air.

One minute, you'll be having some banter with Emma about personal shopping habits and the next, delving into the issues behind a tragic story in the press. Having worked as a journalist on so many news programmes, we had to be able to tackle both major hard hitting stories and light-hearted human interest ones, so I'm quite adept at changing gear and tone.

Luckily, when time's running out and I'm asked to summarise a story in 10 seconds, I can also talk to time! It's fun being back at the Beeb after a 10 year break!" 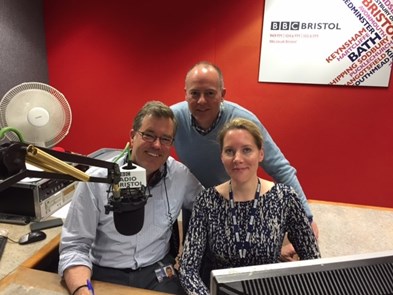 Dave last worked at the BBC as a Correspondent for Radio 5 live, Radio 1 Newsbeat, and a music news reader for BBC 6 Music, later going onto to report and produce at GMTV and ITV News.

He has been Mentor's Head of Training since September 2014, heading up a team of exceptional media, presentation and crisis trainers.